Last of the old time prospectors: Sam Elliott learned his mining trade in the rugged mountains of northern New South Wales.  He also learned to live alone and to survive where other would die. In 1937 he saddled his two faithful horses and rode for eighteen months until he reached Cooktown in Far North Queensland.  When Sam found the Palmer River in 1939 he made it is home.  For the next half century he found adventure, mystery, the remains of a bygone era – and gold.  This is Sam Elliott’s story revisited and expanded to include the experiences of a lifetime and a gateway to the past.

Brilliantly written by John C. Hay and published just months before John passed away in 2017. John had a long association with Sam and his love of the Wild Irish Girl Mine and Battery on the Palmer.

John donated the whole production of books to the Cooktown Historical Society, and we are the sole distributors.

On the Palmer Goldfield Track

On the Palmer Goldfield Track The diary of a miner, George Wilcox, who walked from Cooktown to the Palmer Goldfield in 1874 - a three-week journey of hardships. A5, 26 pages. Price includes shipping within Australia. Wholesale prices for bookshops are available. Contact us.
$10 Add to cart 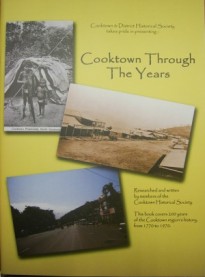 Cooktown Through the Years

Cooktown Through the Years Researched and written by the Cooktown & District Historical Society. Featuring 200 years of Cooktown's history, covering events from 1770 to 1970. A4, 82 pages. Price includes shipping within Australia. Wholesale prices for bookshops are available. Contact us.
$25 Add to cart 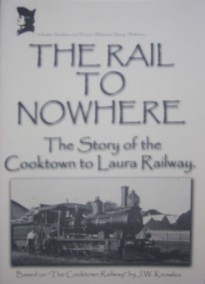 The Rail to Nowhere 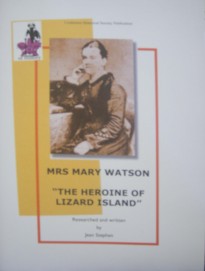 Mrs Mary Watson: "The Heroine of Lizard Island" Researched and written by Jean Stephan. Price includes shipping within Australia. Wholesale prices for bookshops are available. Contact us.
$10 Add to cart